Scouting in a time of Corona

I volunteer in scouting. It’s fun, sometimes difficult and frustrating even but always rewarding. The skills honed by a room full of excited under 8s are readily transferable to other places. Those of you who have attended my public speaking might think maybe I have taken the interactivity from scouting to heart a little too keenly.

It was perhaps fitting that on what was to prove our last in person meeting on the 16th of March; we had a camp fire, did our best to make hotdogs hit the goldilocks zone between stone cold and charred, and sang songs. Whilst we did this the email came out from HQ suspending face to face scouting in the UK until further notice. 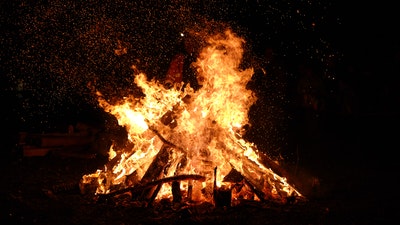 Since our last in person meeting, we’ve done our best to carry on scouting. For a movement born under a state of siege in a far away Victorian war, I felt doing so represented both the original values the scouting movement encapsulated and a more contemporary need to provide some sense of continuity to children in a world even the adults struggled to understand.

We decided the best way to get something going was to use our existing private Facebook group as a platform for virtual scouting. Sadly not every parent of our young people was in the group, but at least we had the reassurance that every member of the group was legitimate, as we’d been using this for communications already when we did nights away. Facebook allows you to “go live” to a private group from both the browser and app versions, so we had a readymade channel to be able to stick on uniform, and go live at the time when we’d normally have our meeting. With two leaders taking turns to do the live segments we managed to talk about scouting stuff, set some challenges and provide some sense that normal life still happened, but in a slightly different way. After our first meeting, guidance came out about how we should conduct online meeting with scouts, and fortunately we were already in compliance, as we made sure two adults were in attendance for the entire meeting.
Although Zoom is wildly popular, I was nervous about the potential pitfalls of using a platform that put ease of use ahead of security, and to run a Zoom meeting with sensible privacy options would involve asking parents to setup an entirely new software solution, and support it. There’s no contest when we already have a Facebook private group where Facebook live is a few clicks away. And the support burden for Facebook is non existant.

Since then, we’ve kept the same format, and added additional material referencing initiatives created by district and national Scouting organisations like Hike to the Moon, as they to adapted to the ‘new normal’. It’s even become part of my Monday routine to finish work in my home office, eat dinner, and then come back into the home office in scout uniform later that evening to sit in front of the camera. We’ve also encouraged the young people to try and work towards various badges, and the Facebook group has been full of pictures of budding cooks and gardeners. 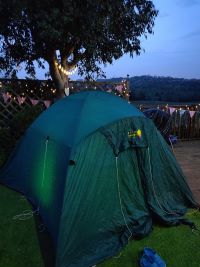 There’s a new trend towards “camping at home” and we’ve already dabbled in this, but this weekend we’re going to try and take it a bit further and try a virtual camp, and encourage the young people to try camping at home as a group activity by doing so simultaneously, and try and set some activities and make it more of a shared experience. Because the taking part is so important, if you have a suitable tent and garden you can use, then great, but it’s equally valid to build a den in the living room.

Of course, we’d all rather be on a real campsite, doing real activities together, as that’s very much what Scouting is about. But, Scouting is also about doing your best and helping others, and sometimes that means being inventive and optimistic even in strange times.